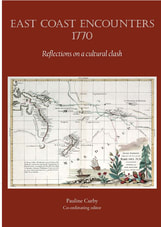 East Coast Encounters 1770 presents ten articles by different authors: some are local residents, others are academics who are recognised authorities in their field. Illustrated with a number of lively images, the articles explore an eclectic selection of themes, including Cook’s early life and the botanical collecting of Joseph Banks and Daniel Solander. A key part of this publication is the ‘view from the shore’, as Aboriginal contributors reflect on the impact of James Cook’s eight-day visit to Kurnell in 1770. The concluding article transports us to north Queensland to consider the interactions of the Endeavour crew with the Guugu Yimithirr people.

​We are grateful to our contributors for providing an insight into their chapter
​
​East Coast Encounters 1770 was supported by a Sutherland Shire Council heritage publication grant, and by Create NSW’s Cultural Grant program – a devolved funding program administered by the Royal Australian Historical Society on behalf of the NSW Government.

East Coast Encounters 1770 – Here's what readers have to say
Rosie Block, Former Curator of Oral History, State Library of NSW – "Have read [East Coast Encounters 1770] from cover to cover. So many perspectives and all of great interest. Your book is so well designed and illustrated - and a good size too.  Thank you for your insights into Sutherland Shire - fascinating.  All your contributors have widened the present and historical picture beautifully."

Michael Christie, Prospect Heritage Trust – "Wow! First of all, congratulations on the Society getting behind the project that has seen this through to publication. What an interesting and eclectic mix of articles that are very thought provoking … Of course, that is what good history should be about. The nice thing about these articles is that on the whole they are relatively accessible. Not purely for an academic audience which is a relief, yet at the same time well referenced, which enables the general reader to follow up any further sources if they wish to. I liked the idea of the bibliography at the end of the book too. A very wise move. Thank you. I hope your Society is able to re-schedule your book launch to a date into the future after this COVID-19 situation ends, as this publication deserves to be celebrated."

Dr Chris Cheater – Read the review on the Professional Historians Australia website.
​
Margaret Francis – "Great book. It's very impressive in its wide range of topics. It's been very well thought out at the committee level and you have an impressive range of writers with knowledge of their topics and who have an academic yet gentle approach. I'm in awe! You draw us into the landscape first, then cover the European background, of Cook himself and the scientific reasons behind the explorations and then you have two excellent articles on the scientific and medical background to health on the journeys. The 'encounter' articles coming where they do towards the back of the book is good because they are not just the 'before the white man' stories that we used to have in history books. They are on-going cultural and community stories. This is significant also in the last two articles with the reflection on how we have celebrated Cook in the past and how his encounters in 1770 up and down the coast are now being acknowledged in ways that reflect our modern society still has a way to go to being completely inclusive! Congratulations, you must be proud of this book." 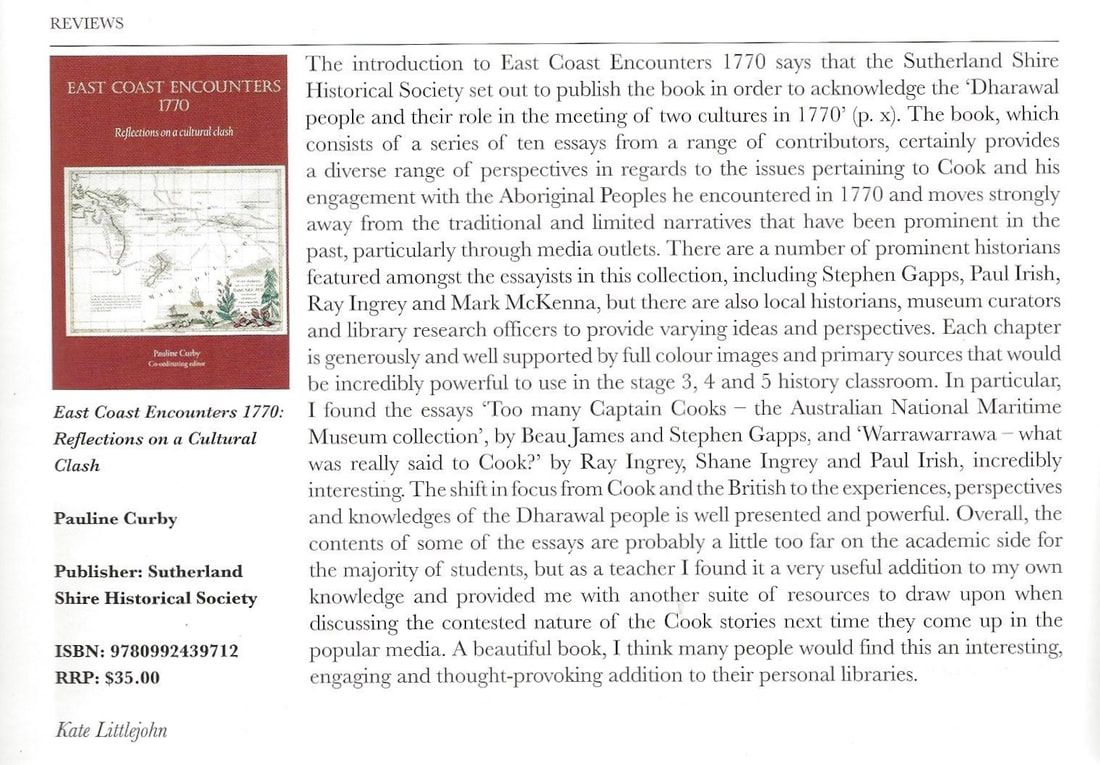 SSHS acknowledge the Review is from the History Teachers Association journal Teaching History, Vol 54, No 4, Term 4 2020, page 78.
​Elizabeth Craig – 'Cook's 1770 landing is a well-known story. Why did we need to write this book?'
Publications Committee member, Elizabeth Craig, explains why this book needed to be written, its background, and how 'East Coast Encounters 1770' is far from just another 'Cook book'.
​
​Stephanie Bailey – ‘Commemorating Cook’
Discovery and Research Library Officer for Sutherland Shire Council Libraries, Stephanie Bailey, examines the history of the Cook commemorations and their place in the wider Australian historical narrative.
​
Sutherland Shire Libraries speaks with Pauline Curby, Elizabeth Craig, Paul Brunton, Elizabeth Adams, John Gascoigne, Ian Stewart, Bruce Howell, Stephanie Bailey and Mark McKenna about what inspired them to contribute to this historic book.
SBS News segment with Pauline Curby and Bruce Howell on the 250th anniversary of Cook's landing.
​Elizabeth Adams – ‘Uncommon endeavour, from Yorkshire to Newfoundland’
Historian Elizabeth Adams traces James Cook's journey – from humble beginnings as a Yorkshire farm lad to his status as the most notable of British naval commanders.

John Gascoigne – ‘Banks and Solander: a Linnaean partnership’
Professor John Gascoigne discusses the partnership of Joseph Banks and Daniel Solander, both of whom were greatly inspired by the master of classifying plants and animals, Carl Linnaeus (1707–1778).
​
Pauline Curby – ‘The Kurnell peninsula, an isolated community’
​Pauline Curby, historian and co-ordinating editor of East Coast Encounters 1770, offers a glimpse into her contributing chapter 'The Kurnell peninsula, an isolated community’, and the history and significance of Kurnell, NSW.
​Bruce Howell – ‘First encounter, a reassessment based on the Endeavour journals’ ​
​Bruce Howell, Deputy Chair of the Sutherland Shire Council Aboriginal Advisory Committee, discusses the importance of viewing Cook’s Landing at Kurnell in April 1770 from both sides – that of the Endeavour crew and, in particular, the people of the east coast of the continent. ​