Each month we are conducting a close study of an object from the museums vast collection. These objects are indicative of the Sutherland Shire and important to the Shire's unique history. They represent each of the museums main collections.


Silver Plated Trowel
​This silver-plated trowel, donated to the Sutherland Shire Museum many years ago, is inscribed:
'Presented to WH Mitchell Esq JP on the Laying of Foundation Stone Jannali School of Arts, 1.10.28'

A 1928 newspaper clipping from the Sunday Times, confirmed that indeed the foundation stone for the Jannali School of Arts was to be laid on 1st October 1928 by WH Mitchell, after the erection of Jannali railway station (eventually completed in 1931) when there was expected to be ‘great building activity’. A 1935 Sydney Morning Herald article reported further that on his death Mr Mitchell, ‘a retired schoolmaster, late of Haberfield,’ had bequeathed £100 and a block of land in Alice Street for the School of Arts.
So what happened to the proposal Jannali School of Arts?

Historian Pauline Curby, in her article for the SSHS Bulletin in May 2014 (p.26, ‘A Shire Mystery, Jannali School of Arts’), writes that lack of finance for such a construction during the Depression was one reason. Another, she suggests, was the fading role of schools of arts through the 20th century. The alcohol-free evening amusements they provided had been important and rare alternative to pubs and hotels. This role was gradually taken with the notable exception of a few such as the Cronulla School of Arts, schools of arts generally were either dissolved or taken over by councils.

No doubt, concludes the author, that had work in Jannali School of Arts been 20 years earlier, in more prosperous times and when such institutions were thriving, it may well have been a success story.

A daisy wheel is a ‘type element’, which is a typewriter component that has all of the characters of the keyboard embossed on its surface. A daisy wheel looks like a small bicycle wheel with a spoke for each character. On the end of the spokes are the molded characters, which imprint onto the paper.

Many electric typewriters and some of the first computer printers used a daisy wheel in the 1970s and 80s but the first daisy wheel actually appeared on the Victor typewriter in 1889. The Victor’s daisy wheel has brass fingers radiating from the central hub (again, just like spokes on a bicycle wheel) with hardened rubber characters on their ends. The daisy wheel rotated into position when a character is selected with the swinging lever. A key is then depressed causing a small rod to push against the end of the brass spoke making the hardened rubber character press against the paper to print.

The daisy wheel was only used on a very few 19th century typewriters, including the Edland, which can be seen in this collection. This innovative means to print would have to wait close to a 100 years before it would find real success in the 1970s and 80s.
​
This typewriter originally sold for $15.

Holt Bible and Congregational Church Hymnal
The Holt family took religion seriously. Thomas Holt was a devoted member of the Congregational Church, as were many other successful colonists such as John Fairfax and David Jones. This church, the first established in what would become Sutherland Shire, gathered adherents especially in Miranda and Menai.
Frederick Holt and his family presumably gave these volumes to the Sylvania Congregational Church, before they were donated to Sutherland Shire Historical Society in 1992.
Published in 1861, the bible was given to Frederick Charles Holt by his parents Lucy and Frederick Samuel Holt in July 1890 on the occasion of his going away to school. The signature of Sylvania farmer W. [William?] Samways snr is also on the inscription suggesting he acquired the bible at some time.
The George S Barrett hymnal is undated but was published in London by the Congregational Union of England and Wales. It is now considered an important part of Congregational history and literature and has been republished in a modern format.
(Donor: Sylvania Uniting Church)

Salt glazed ceramic elephant
This workman’s piece was made from leftover pipe clay at Mashman’s Pottery, Kirrawee where there were three beehive and two rectangle down-draught kilns. The ‘W’ on the bottom suggests this was the work of Hugh (Wattie) Webb, the foreman at Mashmans in the 1950s and 1960s. His wife, Jean Webb (nee Mepstead) gave the elephant to her godson Ivan Webber.
(Donor: Ivan Webber)
​ 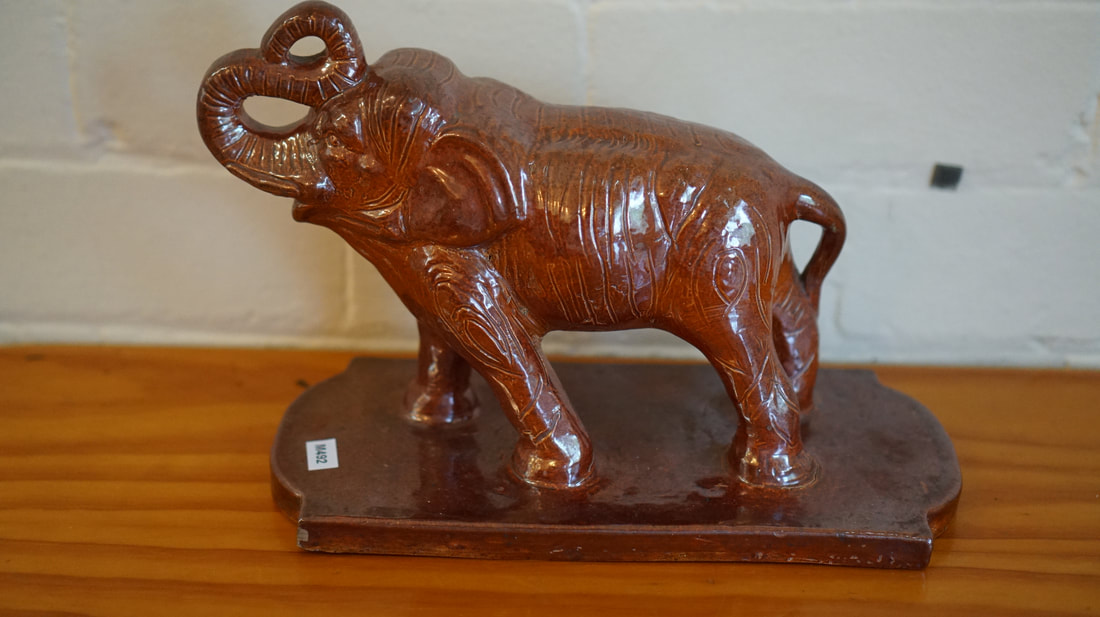 In the 19th and early 20th century, Aboriginal people who distinguished themselves in the eyes of the non-Aboriginal population were honoured with an inscribed metal plaque to hang around the neck. These plaques were known by many names, but most often called ‘King’, ‘breast’ or ‘brass’ plates.

They are also called ‘gorgets’ because they were made not only for men nor for those seen to be leaders. The name was also chosen because the plaques were modified copies of the gorgets worn as badges of office by infantry officers in Australia until 1832. The gorget displayed here is unlikely to be genuine. 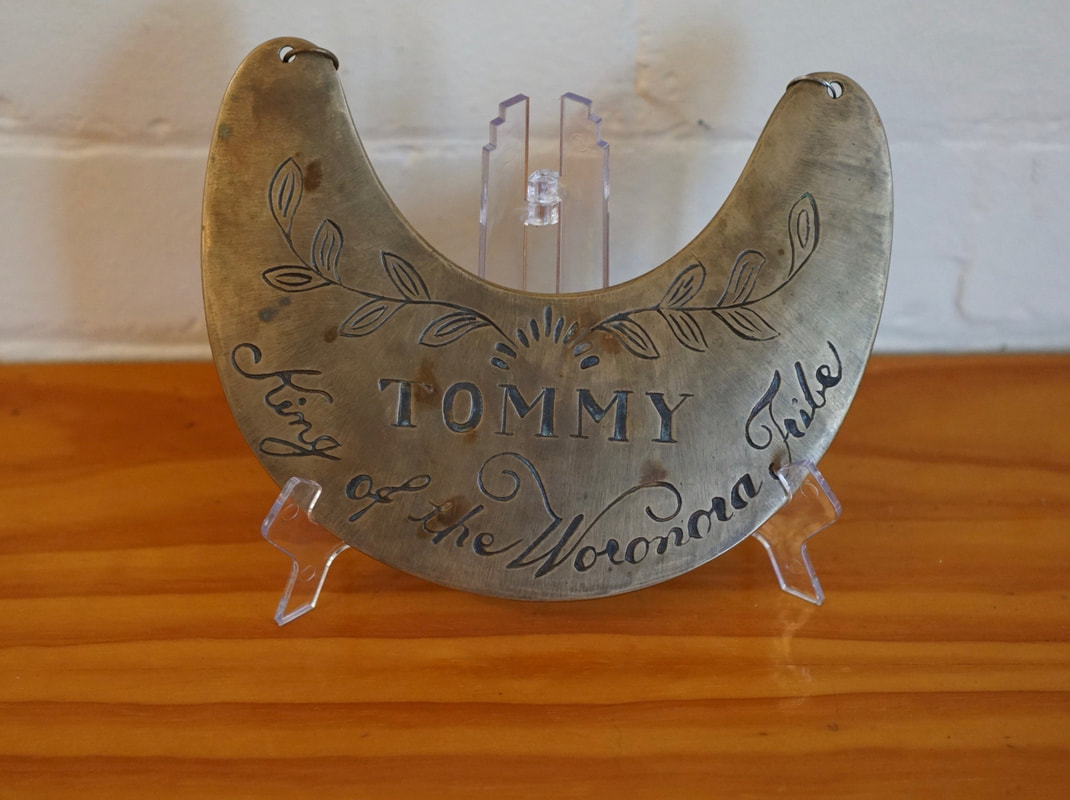 Menai Mailbox
A fixture outside Menai Post Office this mailbox was a relic of the pre Federation NSW postal service.
In June 1905 a post office - in reality a receiving office - was established at Menai or Bangor as it was then called, a sparsley populated "Homestead Selection" area, settled only 10 years earlier by market gardeners.
The Bangor Progress Association campaigned for a post office over several months and Fanny Midgley, whose home was centrally located was appointed to operate the receiving office. Her teenage son Richard carried the mail three times a week to and from Sutherland crossing the Woronora River by boat.
In 1974 two brothers, Society stalwarts Fred and Alf Midgley arranged to have the mailbox donated to SSHS.
Recently we found a 1962 penny in the mailbox.
This mailbox is now on display at SSHS museum 88 Venetia Street, Sylvania here to edit. 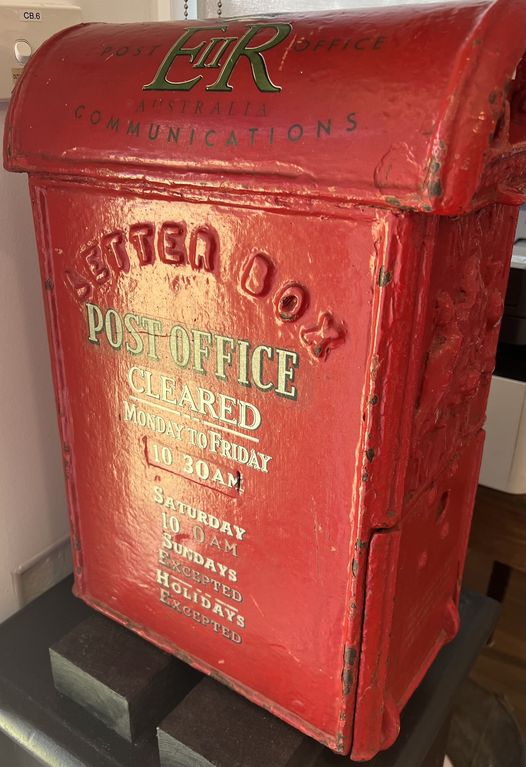